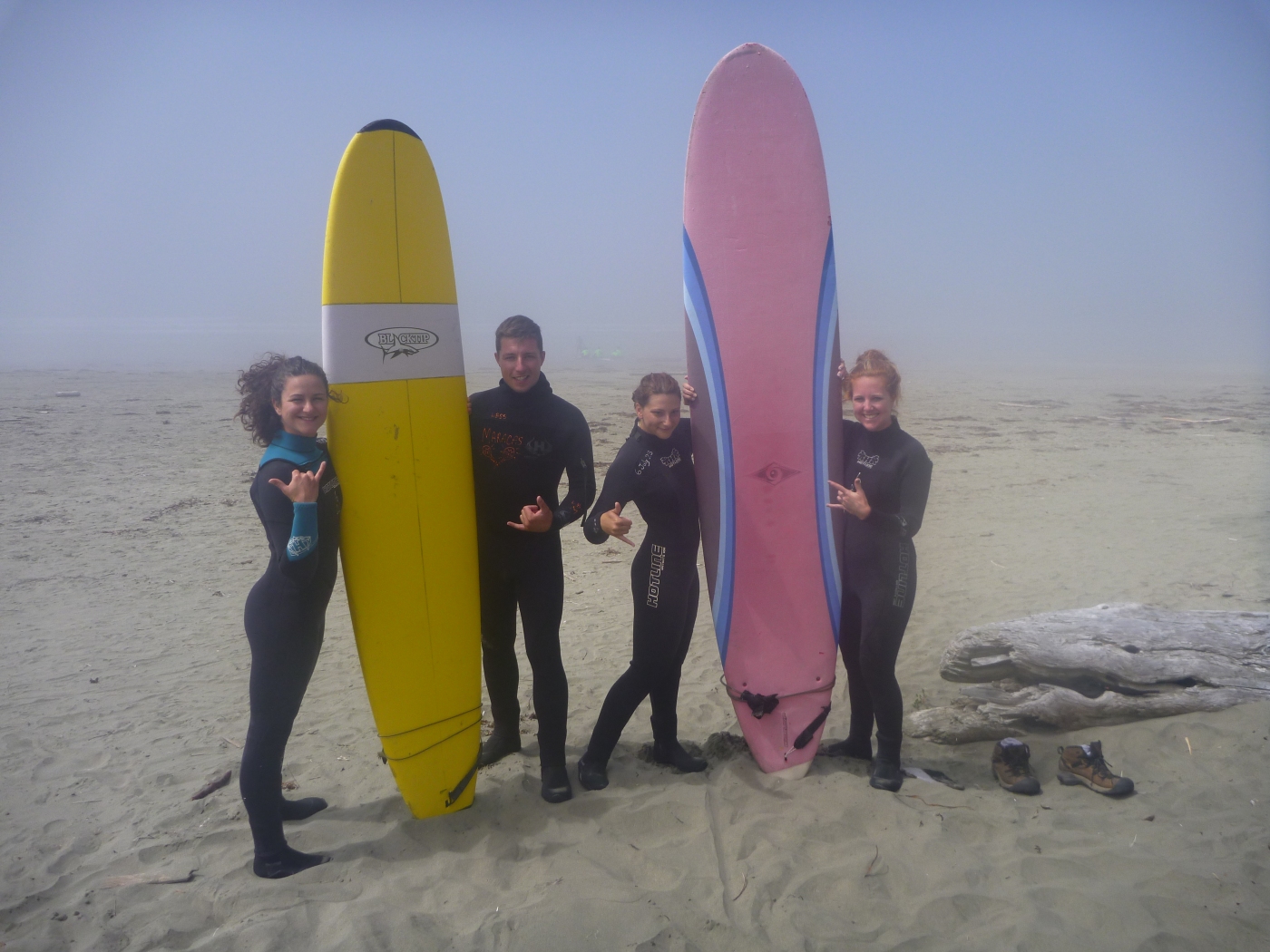 Sunday we went surfing!!!!! Jaimie, Natalie and Natalie’s friend Peter drove into Tofino early in the morning from Ucluelet to meet up with us. We rented boards and wetsuits from a surf shop called Longboard surf shop.  It was about $15 for a board rental and $15 for a wet suit (wet suit was definitely needed seeing as how the water here is only 11 degrees!), which was pretty reasonable.  Amanda had been surfing before in Costa Rica so she informed us that it would probably be best if two people shared a board and take turns seeing as how it gets exhausting really easily, which definitely was the case (good on ya Amanda!) so we saved some money that way.  We drove out to Cox beach, the hot spot in Tofino for surfing.  There were tons of surfers out on the water that day too, we arrived to the beach to be greeted by tons of waves and alot of fog!

Surfing definitely is exhausting.  You need to walk out into the ocean a bit to make sure that you catch a good wave but while you’re walking out there you have tons of waves coming right at you.  So you have to push the surfboard down under the wave while at the same time jumping up so that it doesn’t smack you in the face.  Once you get out to an optimal spot, you need to quickly turn around before the next wave gets to you, get on your stomach and then start paddling like crazy with your arms.  I fell off a bunch of times but successfully rode a wave a few times too.  I wasn’t able to master standing up on the board but I did get up to having on foot on the board and a knee down (not too shabby for the first time surfing).

At night we went out for Jaimies bachlorette at a restaurant called the Shelter (which was A-M-A-Z-I-N-G).  SOOOOO yummmy!!!!!! It was like a giant fancy looking cabin inside with a big fireplace.  You could also see all of the chefs preparing your meal behind a long counter.  I had a delicious pasta in a cream sauce with clams and salmon, and of course a glass of red wine.  There were about 10 of us all there and it was sooo great to be reunited with my old Starbuck loves (Jaimie, Natalie, Amanda and Mike).

Today (Monday) we signed up for a boat trip on a Zodiac  (ya thats right a Zodiac!), that goes to the hot springs!  Its about a 7 hour days trip, with 3 hours spent at the hot springs.  They is the possibility of seeing whales on the boat ride up and back, fingers crossed on that one!!!

On the agenda for tomorrow…. THE WEDDING!!!